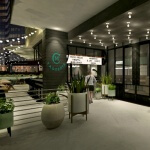 Consider the rumors officially confirmed. Chico Malo, a lively take on Mexican cooking, will open this December. Chris Mckinley, the consulting el hefe in the kitchen, is an already-buzz-worthy character for Downtown Phoenix, and has been recruited by the newly formed Culture Shock Hospitality group to bring more heat to CityScape Phoenix.

Mckinley will oversee the development of the menu and the restaurant’s launch.

“It’s great to be in DTPHX,” said Teddy Myers, a principal of Culture Shock Hospitality. “Hanging out with the people in the neighborhood, they’re excited to see a fun, come-at-able spot with round-the-clock options.”

And options abound on Chico Malo’s menu, which offers breakfast, lunch, dinner and weekend brunch choices and was originally inspired by Mexican street food. It now boasts an array of flavor combinations from all over South America, with highlights including ceviche, street corn, chilaquiles and tiraditos, a Peruvian crudo. Diners can also build their own guacamole or choose from a lengthy lineup of taco options. “Expect some of what’s familiar, but expect some new stuff you haven’t tried, too,” said Myers, about Chico Malo’s take on Mexican.

The same can be said for the restaurant’s beer and specialty cocktail menu, which boasts an abundance of Mexican beers and 10 distinct speciality drinks crafted using top-notch tequila, mezcal and other fresh and regional ingredients.

As for the eatery’s interior, it’s not unlike its name – boasting a bold, bright and unapologetic look. Colorful patterns, one-of-a-kind works of art and rich woods adorn the walls, creating a warm vibe ideal for a weekday business lunch, a date night or an evening out among friends. For more on Chico Malo or to sign up for updates about its upcoming opening, visit ChicoMalo.com.

The recently formed Culture Shock Hospitality may be a new name, but the band of team members’ combined expertise brings decades of experience to Chico Malo and future projects to be announced soon.