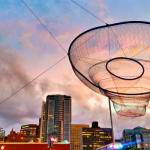 Phoenix Public Art Program Director, Edward Lebow, will present “Art and Innovation in Public Spaces,” a talk that explores the role invention plays in shaping Phoenix and other modern cities. The talk will be held in the Pulliam Auditorium of the Burton Barr Central Library on Tuesday, March 22, from 7:00 to 8:30 p.m. It is free to the public. In addition to presenting an overview of Phoenix’s nationally renowned Public Art Program, Mr. Lebow will discuss the urban beautification efforts that have transformed Phoenix and American cities in the past half century, and the obstacles to advancing new ideas in public works.

“Art and Innovation in Public Spaces” celebrates the 30th Anniversary of the Phoenix Public Art Program and coincides with the release of a 15-minute documentary about the program’s achievements. The video is available on the city’s YouTube channel. Produced by PHXTV, the video features many of the city’s nationally renowned art program’s award-winning achievements. The projects range from new designs for city recycling centers, transit shade structures, water treatment plants and terrazzo floors at the airport to parks, canals, streetscapes, freeway overpasses and pedestrian bridges.