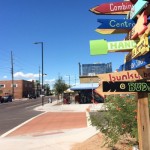 On Tuesday, October 20, 2015, the Phoenix City Council Downtown, Aviation and Redevelopment Subcommittee unanimously approved the formation of a new Enhanced Municipal Services District (EMSD), otherwise known as a Business Improvement District or BID, in the Roosevelt Row/Evans Churchill community just north of the downtown core. The next step involves presenting the proposal to the full City Council on November 18. The formal process to create this new BID began in April 2014 when Downtown Phoenix Inc. was given the go-ahead to develop an in-depth study involving extensive outreach to property owners to determine the boundaries of the new district, to identify the specific services to be covered, to determine the costs, and to create the governance structure. (Single family homes, or properties with less than four units are exempt by law.)

Since then, consultant Nancy Hormann of Horman & Associates, along with a working group of area property owners and neighborhood stakeholders have worked to determine what additional services the property owners deem necessary and to create an overall workplan and budget. In August, the commercial property owners within the boundaries of the proposed bid were sent notifications that included the amount of their assessments.

The perceived need for the BID grew out of a long-term investment by commercial property owners and other stakeholders to create a walkable, livable downtown neighborhood that would attract people to live, work and play. Over the last 15 to 20 years they have reinvigorated an area that was largely neglected and built a vibrant arts neighborhood with thriving coffee houses, restaurants, galleries, boutiques and other small businesses.

Their success has garnered national attention and on October 2, 2015, the Roosevelt Row arts district was named a “Great Place in America” for 2015 by the American Planning Association. “I do want to say thank you,” said Councilman Daniel Valenzuela in his closing comments before the proposal was unanimously approved by the committee. “The award that was just given was done on the backs of the people who live in the community, work in the community, take pride in the community and have this attitude of ‘let’s just do this no matter what.'”

The BID proposal will now be presented to the full City Council on November 18 and will proceed to the full Council for final approval on December 16.

As always, we’ll keep you posted.