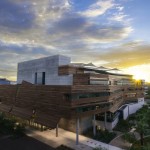 The agreement approved by the Phoenix City Council on Wednesday calls for the university, Banner Health, and any potential development partners, to develop up to five acres on the biomedical campus aligned with the City Council-adopted Comprehensive Master Plan. Included in the agreement is the planning and development of an academic and innovative outpatient primary care clinic that will be designed to advantage all of the new advances and technology to improve patient care. This 40,000 to 60,000 square-foot clinic will be jointly planned and developed by the UA and Banner Health.

“The University of Arizona has been a critical and transformative partner in the development of the Phoenix Biomedical Campus,” said Phoenix Mayor Greg Stanton. “This agreement will move that partnership forward by advancing the academic medical enterprise of the school, advancing science, creating jobs and enhancing medical care for Phoenix residents.”

Leading efforts to develop the biosciences in downtown Phoenix, the UA College of Medicine – Phoenix opened its doors in historic buildings in 2007. Since then, the medical school has graduated more than 250 new physicians and has built close to a million square feet of capital projects on the downtown campus. The UA has invested nearly $450 million in building projects on the campus.

“These new projects will expand the Phoenix Biomedical Campus, enhancing its contributions to both the biosciences and the vibrancy of the Phoenix and statewide economy,” said Ann Weaver Hart, president of the UA. “We are continuing to execute the UA plan of training superior physicians and other healthcare professionals, advancing biomedical research and healthcare practice, and serving our community.”

According to a recent study by Tripp Umbach, the UA’s presence on the Phoenix Biomedical Campus had an impact of $961 million in 2013. In addition, the employment impact for 2013 was 7,185 jobs with tax revenue of $44 million. At full build-out, the UA’s presence is expected to have an economic impact of more than $3.1 billion per year.

The agreement also calls for the City and the UA to develop an updated master plan for the area, focusing on uses, density and proposed development schedules. The City will provide the UA a no-cost exclusive 10-year lease option for development of the property.

“The continued development of this education and biomedical hub is a great catalyst for the citizens of District 8,” said Councilwoman Kate Gallego, who represents the downtown area. “We have seen the area make great strides with the development of the campus, bringing not just construction but permanent jobs in the biosciences to our city.”

“Our partnership with the University of Arizona has been crucial to the success of the growing bioscience and medical education hub in downtown,” said Vice Mayor Daniel Valenzuela, chair of the city council’s Downtown, Aviation and Redevelopment Subcommittee. “This agreement demonstrates our commitment to the Phoenix Biomedical Campus and cements our national reputation as a mecca for higher education and biosciences research.”

The UA College of Medicine – Phoenix began in 2007 in the Historic buildings that once were Phoenix Union High School, as well as the Arizona Biomedical Collaborative research building. In 2012, the 220,000 square foot Health Sciences Education Building opened. The UA Cancer Center at Dignity Health St. Joseph’s outpatient center is set to open on the campus in August; while the 10-story Biosciences Partnership research building is scheduled to open by 2017.

In this story: city of phoenix, Education, Phoenix Biomedical Campus, University of Arizona