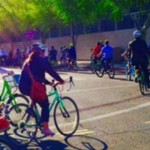 While the weather remained wildly unpredictable in other parts of the country these past few weeks (i.e., snow, hail, wind, twisters), Phoenicians enjoyed sunny skies and balmy temperatures enough to hold many Valley Bike Month, Phoenix Urban Design Week, and Earth Day events in the great outdoors. Even Phoenix Mayor Greg Stanton led hundreds of cyclists around downtown on Bike to Work Day. Time to get your GRID on…

According to the Arizona Republic, “For the first time, metro Phoenix is growing up more rapidly than out. A record number of high-rise, townhouse, and loft housing developments are shooting up in central Phoenix, Scottsdale, and Tempe, and selling out quickly. Condominium sales are climbing faster than regular home sales in the Valley, a reversal of the region’s growth pattern since the 1950s.” People seem to characterize downtown as “cool” or “hot.” For us longtime advocates this is a really exciting time.

Each spring, the Phoenix New Times Big Brain Awards recognizes 15 emerging creative individuals in the areas of Culinary Art, Design, Music, Performing Art, and Visual Art. This year’s winners (one from each category) were announced on Saturday, May 9, at Monarch Theatre during Artopia, the New Times’ annual soiree of art, music, food, and drinks. In other downtown art related news…

Finally, here’s a sampling of upcoming events and activities in our downtown for you to mark your calendar and share with friends, family, and associates:

Over at the ASU downtown Phoenix campus, student journalists with Cronkite News and the Cronkite Public Insight Network Bureau want to understand how the downtown Phoenix community sees itself. Through an online survey, they’re asking downtown stakeholders what they would like to see happen in our city. They’re asking how city leaders, business owners, community leaders, residents, and the media can best discuss the issues that concern everyone the most. If you have a connection to downtown Phoenix, feel free to share your thoughts here.