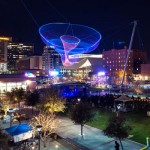 Some consider me to be overly optimistic.

Over the years, in countless conversations critical of Phoenix, I have advocated positivity. I do this, perhaps, because I arrived in Phoenix devoid of expectation. I was happily naïve. I relocated to the valley in the 70s. I was 22. The metro population was barely 1.5 million. Suburbia was well on its way but not yet a sea of…

“houses made of tickytack and they all looked just the same.”

It was before the great musician Don Henley warned us about over development and the low standards of 20th Century westward migration: “Some rich men came and raped the land, / Nobody caught ‘em. / Put up a bunch of ugly boxes, and Jesus, people bought ‘em.”

Or Joni Mitchell’s prophetic lyrics, “they paved paradise and put up a parking lot.”

Yes, the glory days of post war 50s Phoenix were still evident in the early 70s. Specifically, mid-August, 1973. Of course, it was HOT. But I didn’t care. Palm trees, spectacular sunsets, saguaros, swimming pool lifestyle, the legacy of Frank Lloyd Wright, the utopian ideals of Paolo Soleri, and the promise of Modernism by bad boy Beadle made the Valley a magical place for an inexperienced Oklahoma kid holding a new degree in architecture. Easily, unavoidably, I fell in love.

Phoenix and I matured together. However, to open-minded intellectuals, Phoenix remained the big city with “no there, there”—in a perpetual search for identity. I could not accept the cynicism. How could they not see we were just on the cusp of a great transition. We had visionary leaders such as Mayor Terry Goddard and then ASU Dean of Architecture, John Meunier, who were too smart and motivated to miss the potential of this unique desert urban center.

Admittedly, I sometimes wondered, “how wide is this damn cusp? Just one more decade…!”

Nevertheless, when I was successful enough to consider moving my home office to commercial space, I first searched downtown Phoenix and found interesting, special, treasured spaces. Although I could not afford it, I dreamed of my studio in the rooftop penthouse of the old Hanny’s department store. Also, there was this tiny house which is still on the top of the San Carlos Hotel. I discovered the incredible ball room in the historic Security Building which would later become the home of ASU’s Phoenix Urban Research Laboratory.

I eventually located Jones Studio uptown (above) in a beautiful courtyard building designed by my hero, Al Beadle. That was over 30 years ago!

Suddenly, it was the 21st Century, and I realized it had been a long time since I had thought about being trapped in a cusp.

So, several years ago (seems like last week) I found myself in the area of Glendale and Central on a perfect Saturday morning. Traffic was light, so I decided to drive South and route myself through downtown, just for fun.

Through the tree-lined valley of Central, between Glendale and Bethany Home, I continued south past the Heard, the pink Phoenix Tower, the beautiful Phoenix Art Museum, light rail, people, the library, Roosevelt, and more people. By the time I cruised past “Her Secret Is Patience” I was rejoicing. At some point, without me, the cusp had been crossed and I lived in an amazingly beautiful city. Phoenix had become a city that is self-aware, forward thinking, obviously proud and, thanks to another fellow optimist, Mayor Greg Stanton, a city representing a strong first line of defense against shortsighted state politicians.

To all past and present cynics…I told you so!