The Creepy Dystopia of ‘Mr. Burns’ 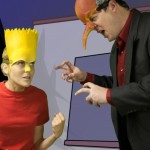 On the tiny, intimate stage of Space 55, director Charlie Steak and the cast of Mr. Burns, a post-electric play create a surprisingly convincing environment of impromptu community clinging to the familiar after the unthinkable occurs. “It’s a fantastic choice for us,” says Steak. “At Space 55 what we really want to do is new, innovative work; usually that means doing original scripts.” He continues, “In this case…this script is something that most of us wish that we had written.”

At the 50-seat venue, says Steak, “we want what we do to be affordable and within reach, but that’s not our mission by itself. Our mission is to allow artists to do things that the gatekeepers at traditional theaters prevent.”

Steak, who wrote the play Woman and Girl and an adaptation of Anton Chekhov’s Uncle Vanya, came to Phoenix seven years ago from PlayMakers at University of North Carolina in Chapel Hill. He’s worked extensively with Rising Youth Theatre, Essential Theatre, and Space 55, where he’s currently serving as Associate Artistic Director and troupe member. Steak’s upcoming productions include another installment of the interactive Captain Jack’s Space Attack, with its signature drinking song and audience participation, and Space 55’s 7 Minutes shows, which give local performers seven minutes in which to do anything they want. He laughs and adds, “The basic idea is you have a group of people after the power grid has gone down — they’re living in a small group for mutual protection, a lot like the people in The Walking Dead, and so they’re sitting around a campfire trying to remember this episode of The Simpsons — that’s the first part…almost like a jigsaw puzzle. And what’s truly fascinating is the bits that they get right, and the bits that they don’t quite get right.”

“And then they go on to become a group of people who start performing episodes of The Simpsons. And this is when perhaps 99% of the population in America is gone, yet The Simpsons survive.” “I’m interested in popular culture,” says Steak. “After the apocalypse these people are…preserving it, and you think about everything you have to deal with…food, water, shelter, safety — but no, there’s room for The Simpsons!” He chuckles. “This is pretty amazing.”