A Sense of Downtown: Phoenix Chorale 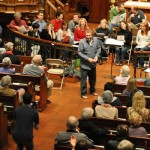 Downtown is more than a grid system of streets and square miles. It is defined by something more. In this short series, new DPJ contributor, Colin Columna hones in on the five senses as his guide to explore what makes downtown Phoenix unique.

With our ears attuned to the nuanced sounds of downtown Phoenix, from the distinctive “ding ding” of an approaching light rail train, to the sounds of laughter from people on their bikes and a radio playing from the open window of a passing car, we begin. Our first stop on this downtown sensory tour is along Phoenix’s cultural highway, Central Avenue, at the intersection with Roosevelt Street. On the northwest corner stands the landmark Trinity Cathedral, spiritual home of the Episcopal congregation and secular home to the renowned Phoenix Chorale.

The Cathedral, completed in 1920, provides a graceful connection to Phoenix’s history, but visit during First Friday Art Walk and the space is filled with the sights and sounds of contemporary urban life. The Cathedral Center for the Arts provides the visual experience in the Olney Gallery and Phoenix Chorale’s Artistic Director Charles Bruffy conducts the surround sound of the Grammy Award winning ensemble during Open Rehearsals. “I love our open rehearsals,” says Bruffy, “they allow us an opportunity to invite people who may be familiar with their own church choir but unfamiliar with what we do, to drop in and experience something new and hopefully surprising.”

Bruffy explains the rehearsals allow for the audience to actively engage with the process. “Our singers have trained and perfected their gift and talent to sing from the heart. The casual atmosphere of open rehearsals allows us to not only sing but talk to our audience, answer questions, tell stories about the songs and tune their ears for the adventure of choral music. Our goal is make it possible for as many people to explore and enjoy the music and just as important to have fun.” Choral music evolved from the earliest form of musical expression, telling stories through folk songs and devotional chants. Charles Bruffy plays a significant role in that evolution: appointed Artistic Director of the Phoenix Chorale in 1999, Artistic Director of the Kansas City Chorale since 1988, Chorus Director for the Kansas City Symphony Chorus since 2008 and an impressive list of other gigs around the country. His exhaustive schedule ensures that chorale music remain relevant and at the top of the charts.

Under his leadership the Phoenix Chorale and Kansas City Chorale have ten Grammy Award nominations and each garnered two Grammy Award wins. The latest Phoenix Chorale recording, Northern Lights, spent a lucky 13 weeks on the Billboard charts and of special significance to Bruffy, “We were named “Best Classical Vocal Album of the Year” on iTunes Best of 2012, how cool is that?”

Adding to the richness of the Chorale’s sound is the unique qualities of Trinity Cathedral. “Many of our concerts are performed in sacred spaces, like the Cathedral.” he says, “It may be that they are usually of older construction, of stone and hard acoustics that singers enjoy. But there is something very special that occurs when we perform in the sanctuary, a reverb is applied creating an added element to the performance, as if the voice is singing a duet.”

If location is everything, Bruffy believes he could not be luckier. “I love being in the ‘hood. Our city is so culturally rich and there are so many flavors and cuisines to sample downtown.

I can leave work, get to my apartment, go to one of my favorite places Cibo Urban Pizzeria for a meal and still make it to rehearsals on time.” After performances Bruffy is often spotted at a few of his other favorites, including St. Francis, Breadfruit and Hanny’s courtesy of the Light Rail.

The musical dynamo believes the trains add to downtown’s vitality, “When I see the light rail go by, listen to the tone of the bell, I hear the sound of a twenty-first century city.” Bruffy sees a correlation between the eclectic cuisines found throughout downtown and the Chorale’s concerts, “We are doing the same thing, creating a tantalizing tasting menu of songs.”

Asked to imagine a concert that captures the flavor of downtown Phoenix Bruffy quickly, and expertly, whipped up this selection and provided a few highlights:

“Phoenix” by Ola Gjeilo, the Chorale’s 2010 Composer in Residence.

“In the Beginning” by Aaron Copland. “This piece reminds me of the mythical bird, and our city’s namesake, the Phoenix, always able to surprise, evolve and reinvent itself.”

“Anasazi Women” by Anne Kilstofte. “This piece is selected from our 2014/15 season, Desert Song concert. A musical celebration of the beautiful Southwest landscape in which we live.”

To sample more of the Phoenix Chorale visit their website: www.phoenixchorale.org or call 602-253-2224.