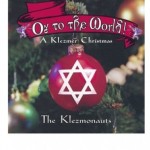 Here at DPJ, we’re all about sharing what we love. Beyond the stories that make us love downtown, we often come across things that catch our eye, make our senses tingle or have us dancing in delight. “We Like…” turns a brief spotlight on the little treasures that make our day, with helpful links so you can share in the fun. Looking for the perfect seasonal soundtrack? Trying to find an entirely unique gift? Nothing could be jollier — or quirkier — than Oy to the World!, the holiday-melding album from Paul Libman featuring a vastly talented group of musicians called The Klezmonauts.

It’s been around 15 years since Libman released his inventive collection of tunes on Oy, and the album’s still selling like hot latkes. Although Shirim Klezmer Orchestra tweaked Tchaikovsky’s beloved score into a klezmer Nutcracker, there’s never been anything quite like Libman’s light-hearted assortment of klezmerized, jazzy Christmas carols, with their startlingly familiar musical references.

My sister discovered Oy several years ago, and both of us have been gifting it year-round ever since. Honestly, it’s just as refreshing in July as December. Here’s a handful of reasons why I love this CD:

When I contacted Libman to ask more about the album (and plead for a sequel), he responded with a friendly e-mail. “At the time I created Oy, I had a jingle production company and a recording studio in Chicago,” he says. “I’ve since found my calling in musical theatre and have moved to New York.”

Before he began composing award-winning musical theater, Libman wrote thousands of tunes for Old Spice, Hamburger Helper, and countless other products — check out his archive of commercials on YouTube and his website, where the “Demos from Hell” are particularly entertaining. “Not surprisingly, Oy has been a terrific calling card for me in NYC,” he told me. “Nearly every musician I meet knows or owns the CD.”

Based on the album’s quality, I wasn’t too surprised when Libman told me more about The Klezmonauts, a one-time pick-up band he assembled just for Oy. “They were an almost embarrassingly talented combination of studio musicians and Chicago Symphony members,” he said. “I’m not entirely sure what inspired me,” Libman added, “but, being Jewish and married to an Italian Catholic, I was especially excited to create something both our families could enjoy.”

Pop over to Amazon or iTunes and grab some Oy for yourself — the music’s witty, irresistible, and curiously addictive, and you’ll hear something new every time. Happy holidays!

In this story: carols, CDs, Christmas, holiday music, klezmer, Klezmonauts, music, oy, Oy to the World, Paul Libman, We Like