High Noon with The Queens’ Tea 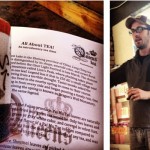 Michael teaching “All About Tea.”

Hello, Downtown Phoenix! And happy Spring to you! A lot has happened since I left town in July, when I moved away for love and grad school. The move took me to Salt Lake City where I live downtown, just like I did in Phoenix.

I’ve been learning and exploring my new city and, to be honest, Salt Lake has been good to me. New development downtown, extensive transportation, infill, arts, culture, history, and an awesome foodie scene have made for an adventurous and exciting year.

Just two months after I arrived here, my partner, Michael Ferguson, and I launched The Queens’ Tea, a company that sells premium loose-leaf teas and tisanes, with an emphasis on community engagement and education. (One of our tag lines: “tea – the original social media.”)

Earlier this year we started teaching classes and this weekend we are bringing our “All About Tea” class to Phoenix.

I’m excited to share my passion about tea with my old neighborhood, and to bring this company to the place where it all began. The business is based in Salt Lake, but it has its origins in downtown Phoenix.

The idea for the tea company began in my apartment in downtown Phoenix in February 2012. One night, after a discussion about coffee, Michael and I realized we knew nothing about tea. What exactly is tea? Where does it come from? What’s the difference between black and green tea? What’s an oolong tea? And why does it taste gross when I make it? Boxed tea from the grocery store proved little help in answering our questions. When we tore open the little paper bags, we poured out some dust and stuff that looked like grass clippings. This is tea? No wonder I’m a coffee drinker.

Soon we tried to dry fruit in the oven to mix with the tea bags we bought. But, instead of something flavorful, sweet and delicious we were left with withered, tasteless fruit chunks that even my dog wouldn’t eat.

Discouraged but not yet defeated, we kept searching and learning. At a teashop in Phoenix we finally discovered the Holy Grail: loose-leaf tea, which we discovered just in time because, as luck would have it, a trip to China and Japan was just a few weeks away. Now that we knew what tea should be, we figured we would be somewhat informed while in the tea-growing capital of the world.

In Beijing we took classes taught by tea experts who had studied many years to become certified as tea teachers. We tasted some of the freshest leaves and learned about brewing and harvesting. At the tea mall, a five-story shopping center selling only tea leaves and and accessories in the middle of the tea district, we met a tea farming family. In their shop they shared with us tea they had grown and prepared and let us sample dozens of varieties. Through pointing and nodding and the help of an online translator we learned more about them and their business. It was in that little shop where I first drank milk oolong that for me is now the taste of summer.

When Michael and I arrived back in the US, the idea had firmly taken hold. Our nascent hobby became a new business venture because we wanted to share our love of tea with the world. The Queens’ Tea was born.

We spent the rest of the summer learning how to start a business and formed an LLC by September. In November, we sold tea at the Wasatch Front Winter Farmers Market and then things took off. We were asked to serve tea at the Fatali Gallery in Park City during the Sundance Film Festival in January; we met other small business owners; we sold at markets around the state; and got on the shelf in some local stores. This coming weekend Michael and I are bringing our tea class “All about Tea” to downtown. We hope you’ll be able to join us as we explore the history, health benefits, production and best brewing methods of this ancient beverage.

You’ll sample six of our teas including green, black, white and oolong and leave with a gift bag of five samples plus the class literature prepared specifically for this class.

As the world’s most widely consumed beverage, the varieties of tea are endless. The vision of The Queens’ Tea bridges peoples and cultures, bringing them together by sharing the worldwide variations and traditions of this exquisite drink. And since it has been cherished for thousands of years, tea rekindles our connection to history, the earth, and each other.

Photos provided by The Queens’ Tea.