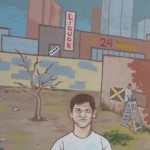 I may be one of the few people to notice the mural on the side of the Phoenix Public Market well before the announcement that the indoor market would be closing. The mural depicts a market at the center of a community in the process of rebuilding itself. The market bears a liquor sign with an impossibly ambitious 24 hour sign (currently not legal in AZ or most anyplace for that matter).

Phoenix Public Market’s Urban Grocery never was a liquor store, but it did have the best selection of local beer and wine in all of downtown. The market featured about 2 dozen Arizona produced bottles and cans of beer as well as a few regional craft beers.

The outdoor market will live on. Some have pointed out that it was never a full-service grocer. Others have noted that there are other local gathering places that fulfill the market’s third place qualities.

There may be far more important reasons to note the market’s passing. Your Downtown Beer seeks to work on the practical: “Where does one go to buy packaged quality beer in Downtown Phoenix now that the Phoenix Public Market’s Grocery is closed?”

Downtown Phoenix has good beer available. We’ve established that. If you think about the many dozens of restaurants and beer bars with tapped beers (Copper Blues has over 60 alone) and you add in the extensive bottle list at the Lost Leaf (over 150) you’re looking at hundreds of beer choices, but it’s not as simple as that. All of those places have on-premise licenses — you have to drink it there, you can’t take it with you. When it comes to “beer to go” I can’t resist but make the analogy, “Beer, beer everywhere, but not a drop to take.”

Remembering that Chloe’s Corner took over the Oakville Grocery space and assumed the beer and wine store license, I headed over to Cityscape to see what might be available. To my dismay, Chloe’s was closed for a private event and I was literally shooed away. I couldn’t even press my nose to the glass windows to see what might be available. Rest assured, Chloe. I will be back. Undeterred I popped into CVS and saw several 24 oz cans that are normally seen in slim brown paper bags. A lone Arrogant Bastard bottle mocked me as if it had consumed all of the other beers that might have been in the cooler. Stone Arrogant Bastard is a great beer, but we can do better. We want our locals too.

With many things downtown, you have to know where to go and you may have to widen your search perimeter. Thomas Market Liquor on Thomas and 3rd Avenue fits all of my downtown beer requirements. It has a knowledgeable staff. There are several cooler doors full of regional craft beers as well as fine imports. There is even an entire door filled with beers brewed in Arizona. The beer geek in me noted that the code on an empty shelf indicated there once was bottles Deschutes Dissident. Thomas Market Liquor is just a shade over two miles from the Phoenix Public Market — a short light rail trip or a 15-minute bicycle ride. I settled on a Dogfish Head Theobroma. It’s an ale based upon an ancient Meso-American beer recipe containing cocoa, honey, chilies and annatto. The chiles and spice are a perfect complement a savory pork dish or a dessert with chocolate.

Fortunately, we may be on the verge of a breakthrough when it comes to packaged beer. The Arizona State legislature made a change to Title 4 of the Arizona Revised Statutes that will go into effect in August. The change allows beer bars to fill growlers of beer for off-premise sale. A growler is a 64 ounce glass jug that is filled from the tap. It used to be that only a brewery could fill a growler for sales, “to go.” This law change will allow any beer bar or liquor store with tapped beer to sell them.

There will certainly be a period where businesses work out whether they want to have access to the, “to go” market, so don’t expect a deluge of options right from the get-go. A business has to devote resources and inventory to growlers. Filling a growler without beer loss is not very easy either. One hopes that of the hundreds of beer taps downtown, a few will devote some to off premise sales this summer.

Where do you shop for beer downtown?