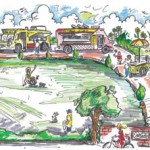 Farmer Woody, a local farmer and chef, with the help of Valley Leadership, is bringing a community garden to Downtown Phoenix. A first planting ceremony is planned for Thursday, March 8 at 8 a.m.

The garden, called Garfield Garden Park, sits on two formerly blighted lots (14,000 sqft) in the heart of the Garfield District. Richard Melikian, owner of the Hotel San Carlos, has donated the lots.

“This garden has been a dream of mine for many years,” said Farmer Woody. “Teaching area residents how to grow their own food improves not only the well being of the individual but of the overall community.”

Farmer Woody’s mission is to transform the Valley of the Sun into the Valley of Gardens. Valley Leadership is helping Farmer Woody with fundraising and general coordination for the project. The garden will be open to the public by April 2012.

The group is making a call to the community for in-kind donations including trees, fencing, gardening supplies and solar lighting.  A Kickstarter account has been activated for monetary donations.  Local companies including Sprinkler World, Superstition Springs Farms, Shamrock Towing and many others have contributed to the project.

The park will feature a growing garden along with an outdoor amphitheater for community gatherings.  The two will be divided by a food truck drive. The amphitheater has a “kitchen” stage for teaching culinary arts, hosting local potlucks, giving public speeches, acoustical only musical performances and general education. A shipping container on-site will be transformed into a farmers’ market stand to buy, sell, and trade produce, as well as a Superstition Farms gardening supply center for the neighborhood.