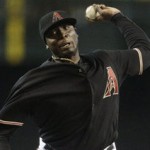 For the Arizona Diamondbacks, the first half of the season was one that they would like to forget. As the team gets ready to play the second half, there are some new faces rising to the occasion and some familiar ones hanging around.

After interim team manager Kirk Gibson won his first game, the tide turned as the team was unable to hold onto leads to win games. After the All-Star break last week, the D-backs headed to San Diego to face the National League West-leading Padres. In a series that promised to be a difficult one, the D-backs were swept once again. With the opening game of the series against San Diego rather lopsided, the two that followed were close, but without victory. After spending time in California, the team returned to Chase Field to play a couple more teams that have had successful records.

On Monday, the D-backs faced the New York Mets. The Mets are in second place in the National League East, all but assuring a tough series. For those of you that don’t know Ike Davis, the former Arizona State Sun Devil has earned his position as the starting first baseman for the Mets. Davis, a graduate of Chaparral High School in Scottsdale, has proven himself extremely well in the Big Leagues. In the first game against the Mets, the D-backs manufactured a convincing victory, winning the game by a total of 11 runs — most certainly a fun game to watch. The following evening was a little closer, as the D-backs edged the Mets by a score of 3 to 2 with Barry Enright gaining his second win as a D-backs pitcher. The third and final game of the series was even closer, as Arizona took part in a marathon game going 14 innings to beat the Mets with a walk-off RBI single. This marked the first time that the D-backs swept a three-game series since last August. The team swept a two-game series against the Giants earlier this year.

After the series against the Mets, the Diamondbacks played Thursday night against another solid National League West competitor, the San Francisco Giants. The Giants’ ace pitcher had the team’s number, as he was able to shut out the D-backs. Into the weekend, the D-backs will continue to face the Giants as Gibson’s record now stands at 6 and 11.

A reminder that Friday night is fireworks night after the game (weather permitting), and it is also singles night, sponsored by 102.5 KNIX and Sauza Tequila. Sauza will host a complimentary tequila tasting before the game. Tickets are only $15 for the event, and can be purchased at dbacks.com using a special promotion code.

Saturday’s promotion has been challenged due to a production error in the Mark Reynolds replica jerseys. The first 15,000 fans will receive vouchers for the jerseys to be redeemed at a later date.

Finally, on Sunday, the first 5,000 kids ages 12 and under will receive a Diamondbacks back-to-school binder. A post-game concert by the Wiggles is included with the ticket price, so bring out the kiddos!