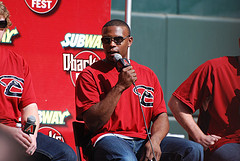 The Arizona Diamondbacks look to start an exciting season as they made some solid roster moves this off-season. Some of us may be wondering where in the world the money came from. Last season, the D-backs let Randy Johnson go to the San Francisco Giants as a result of not being able to meet his salary requirements. Others are excited that the organization has ponied up the cash to keep such performers as Mark Reynolds and Justin Upton.

Reynolds, a fourth-year player, has been solid for the team over the last couple of years, while producing offensive numbers that seem to increase year after year. Despite his numerous strikeouts last season, Reynolds knocked in 44 homers and 102 RBI for the Diamondbacks in ’09. It is exciting to be able to secure a player like Reynolds at the hot corner for another three years.

Upton had a mediocre beginning of the season, but then self-corrected to earn a spot on the National League’s All-Star squad last year. He has grown to be an exciting player and a solid contributor to the Diamondbacks. This year, the Diamondbacks aptly named “Uptown” as a location at Chase Field where fans can cheer for Upton and the D-backs. Uptown is the new fan zone behind the All-Star outfielder that will be there to back him Friday and Saturday nights. The Diamondbacks have designated a special section for designated games to increase the fan support and the support of the team. Each ticket includes a rally towel for the game and promises to be a super-charged Diamondbacks fan section.

As the D-backs get ready for the 2010 baseball season, look forward to seeing supporting fans at the games. Remember to take advantage of the special events that are held by Chase Field and the Diamondbacks organization. Additional ticket information about Uptown can be found at dbacks.com.