LEEDing the Way in Downtown Phoenix

Last week’s Greenbuild International Conference and Expo wasn’t all about trade show booths and discussions. On Friday afternoon, conference attendees got out and explored some of the Valley’s green buildings and innovative sites. Of particular interest to DPJ readers was a tour of five urban infill sites in Downtown Phoenix. 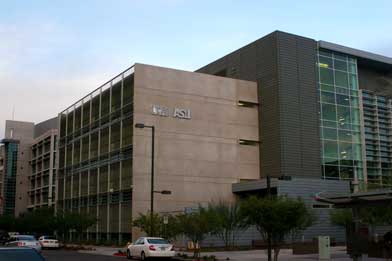 The first stop on the tour was Arizona Biomedical Collaborative Building 1 at 5th and Van Buren streets. This building is the result of a unique partnership between University of Arizona and Arizona State University. It was built to support the two universities’ research in biology, chemistry and biomedical informatics. The ABC is the first building in Downtown Phoenix to achieve a Leadership in Energy and Environmental Design (LEED) Gold certification. Along with receiving LEED points for being an urban infill project and proximity to public transit, the building was also lauded for its shower and cycling facilities, flexible laboratory and office planning, use of recycled and locally sourced materials and a series of energy and water conservation features.

The tour then progressed up 5th Street to Bioscience High School. Not only is the high school home to a unique curriculum of study, but the building itself is also a learning tool. It is designed as a facility that is both environmentally sensitive to its urban desert context and well suited to its academic purpose. The Bioscience High School campus employs solar hot water heaters (and is “wired” to accommodate photovoltaic panels in the future) and maximizes the use of natural light throughout the campus. It also employs flexible learning spaces. While time and budget constraints prevented the building from achieving LEED accreditation when it was first built, a student group is planning to seek accreditation as a school project. They hope to obtain a LEED Silver rating. 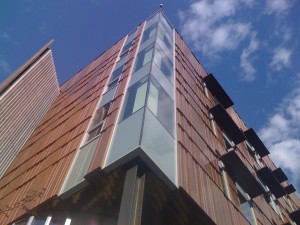 The next stop was the recently opened ASU Nursing and Health Innovation Building on the corner of 3rd and Fillmore streets. While there have been some concerns about the cost and sustainability of the building’s copper exterior, the tour learned that the 80% of the copper used was sourced from recycled materials and was much cheaper than the glass curtain wall prevalent on many buildings. In addition, the copper siding is almost maintenance-free, and will naturally patina as it weathers. Some other environmental features incorporated in the building include structural shade incorporated into the design of the building, the salvaging and replanting of the trees that were originally on the site, solar water heating and a 60% reduction of water consumption through xeriscaping and low-flow fixtures. The project is expected to earn Downtown’s second LEED Gold certification.

Next up was another ASU building: the Walter Cronkite School of Journalism and Mass Communication/KAET Channel 8. This was a great day for the Greenbuild tour to take place, as the building was gearing up for the presentation of its LEED Silver certification by U.S. Green Building Council (USGBC) President Rick Fedrizzi later in the afternoon. Sustainability was an integral part of the design and construction of the building. Green features include the building’s orientation, which allows for maximizing daylight; its to mixed use of retail, classrooms, offices and television studios; and the use of condensation from the air handler in irrigating the building’s native and adaptive landscaping.

The last stop of the day was the city of Phoenix’s Civic Space Park. While not seeking LEED certification, the park is an example that going green does not mean sacrificing aesthetics. The focus of this stop was the park’s solar panels. These panels are integrated into the park’s unique shade canopies. Combined, the solar system generates 75,000 kWh annually (enough to power eight to nine residential homes), providing most of the park’s energy needs. The system is designed for expandability and future energy needs. Other sustainable features of the park include its brownfield site, the shade structures and its porous concrete walkways.

The participants in the tour were not only impressed by the sites we visited, but also by the fact that after three days of meetings inside the Convention Center, they were able to stretch their legs and witness firsthand how Downtown Phoenix is reemerging as a vibrant urban hub.