For the past four years, Shaun and Brady Breese have brought smiles to the residents of Central Phoenix with their Urban Cookies bakery. Their secret to success has included a mixture of high-quality ingredients, unique gift packaging and passion for their customers and community. But, perhaps the most important ingredient that they sell is happiness. “Cookies and cupcakes make people feel good,” says Shaun. 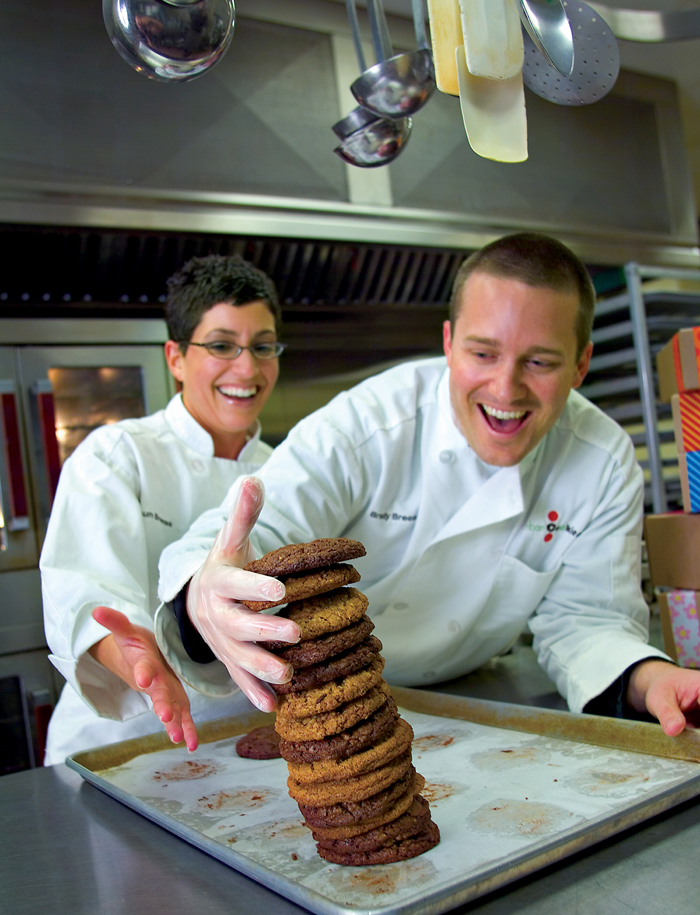 Shaun and Brady are pretty much Arizona natives; Shaun has been here since she was 3 and Brady since he was 6. They met in grade school, followed each other to high school and then to ASU. After graduating, they worked in various Central Phoenix neighborhoods, Brady working as a life insurance agent and Shaun working in marketing, including a stint at the Greater Phoenix Chamber of Commerce.

In 2005, Shaun and Brady had an idea to start a business. By November, they had secured a deal with the Florence Crittenton Center to use their kitchen facilities in the evening. In exchange for using the Crittenton baking facilities in the evening, the Breeses agreed to train at-risk girls in the kitchen as well as in marketing and customer service. For the first year, they kept their day jobs, working at night. During that time, they only sold their goods online. On weekends, they went out to the community and began giving samples at the historic home tours in Central Phoenix neighborhoods such as Willo and Encanto-Palmcroft. They also began selling their cookies at the Saturday Downtown Phoenix Public Market.

The Breeses found that these samples and local sales encouraged their business to spread virally through word of mouth — still their best way to get new business. In 2006, they opened their first retail store next to Melrose Pharmacy in the Wagon Wheel building just down 7th Avenue from the where they baked their cookies at Florence Crittenton. In 2007, they found they needed a bigger space and wanted their own kitchen, so they moved to their current location on 7th Street near Highland Avenue. Consistent with Shaun and Brady’s vision, their storefront is not only hip, but also green, featuring bamboo flooring and low-emission paint. As well, the ’50s-era building is a classic example of adaptive reuse. Previous tenants included a café and pizzeria. 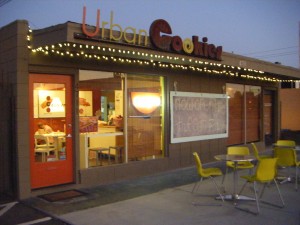 Despite the poor economy, the couple has managed to keep their business growing. A decline in higher-end gift box sales has been offset by increased retail sales. “Even in this economy, $1.99 is an affordable break from the ordinary for people,” notes Shaun. This points to the importance of diversity for small businesses, especially in this economy. What started out as a completely online endeavor has morphed into a business model that is now about 50% online and 50% retail through growth and various efforts to weather these tough economic times.

Urban Cookies is always looking for new business ideas and partnerships. It recently began selling cupcakes, affectionately coined “OllieCakes” after Shaun and Brady’s 8-month-old son, Oliver. They have also added two layer cakes to their retail selection. During the summer, they offer ice cream cakes to their retail patrons, and have also begun selling organic dog treats. In addition, they are entering the wholesale market, providing cookies to the recently opened Urban Wine Bar and Grocery at the Downtown Phoenix Market. They are also approaching other restaurants and grocery stores around town and offering catering for parties and business meetings.

Currently, Urban Cookies offers four different types of cookies, as well as four types of cupcakes. As well, each month, they feature unique seasonal items. For November they are offering a pumpkin pecan cookie and a cranberry orange cupcake. For Christmas, they are bringing back the popular coco-mint cookie. This holiday season, Urban Cookies is partnering with Danielle Librera and Brian Coonce at the Sweet Pea Bakery to offer pies and tarts to their customers. In addition, they sell a variety of custom gift boxes, small “signature” gifts and individually wrapped favor gifts. These gifts have become popular for business clients, birthday gifts or simple pick-me-ups for somebody who’s had a bad day. OllieCakes have quickly become popular for baby and toddler birthdays. 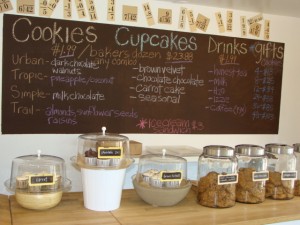 Urban Cookies’ notion of Central Phoenix community extends to local businesses as well. Proud members of Local First Arizona, they work together with other nearby independently owned businesses through cross promotions, joint events and business referrals. It is important to have a network, says Shaun, although she notes that this network is being challenged by the economy, and lists of several small businesses that have recently closed, including Lisa G and Palatte. Meanwhile, they are happy to see the growing conglomeration of new independent business near Central and Camelback, including Maizie’s Cafe & Bistro, Lola Coffee, Oliver and Annie and Smeeks, among others.

Some examples of how local businesses are working together include publications such as the Small Wonders map, as events such as Local First Arizona’s Certified Local Fall Festival at Duck and Decanter, a “Champagne and Shopping” event at nearby Roots Salon, as well as TwitterHunt. During First Friday on December 4, Urban Cookies will be participating in “Sweets Alley” as part of the second annual “Crafeteria” being hosted by Frances Boutique in their parking lot near Central and Camelback.

In their limited free time, the Breeses enjoy spending time with their son at local treasures, such as the Children’s Museum of Phoenix, or feeding the ducks at Granada Park. Oliver also enjoys playing on the grass and people watching at the Biltmore Fashion Center. “After hanging out with us all week in the store, he’s excited to see other people and places,” notes Shaun. When Shaun and Brady are looking for more grown-up fare they like heading to Bomberos Café and Wine Bar, which is within walking distance from their home, or Aiello’s, a favorite for Italian food.