A lot of those who travel to Downtown Phoenix for arts-related events end up in Evans Churchill and don’t even know it. Within the district’s boundaries (roughly McDowell to the north, Fillmore to the south, 7th Street to the east and Central Avenue to the west) stand many of the most relevant cultural aspects of Downtown Phoenix’s resurgence in recent years. This predominantly commercial district is commonly known as Roosevelt Row and is guided by the Roosevelt Row Community Development Corporation (CDC).

The most popular hub of the First and Third Fridays art walks is right in the center of the district near 5th and Roosevelt streets. Many of Phoenix’s best-known art galleries call the district home, as well as some of its hippest restaurants and shops. Roosevelt Row’s eastern side has become a well-known hangout spot, and hubs of activity are developing along the light rail line on Central Avenue and the corner of 3rd and Garfield streets.

Originally, the neighborhood was the two-block area spanning from 4th to 6th streets and Roosevelt to Garfield streets. This area was never given historic designation, but most of the original buildings on these blocks still stand today in some form or another with mixed-use purposes. Evans Churchill is perhaps the greatest example of a Downtown neighborhood in transition. Severely blighted in the ’70s, ’80s and early ’90s, the arts community took this all-but-forgotten (and frankly, very gritty) neighborhood in as its own, and the transformation took off from there. Much of the neighborhood remains in development or in limbo, with vast chunks of dirt lots. 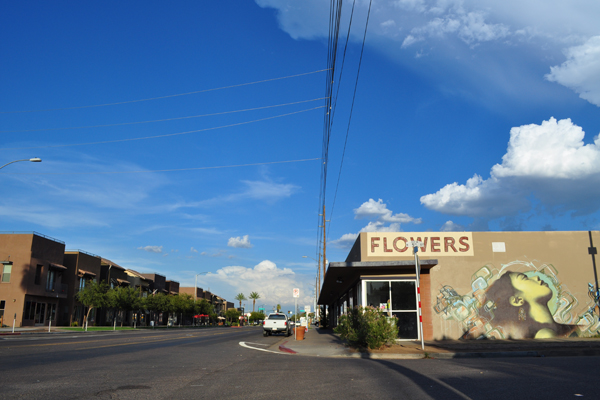