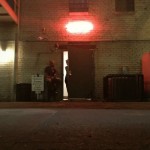 No giant sign hangs over its entrance. It’s only giveaway is the inexplicable bouncer standing near the door. If you’re there after 7 p.m. or so, at least one motorcycle or scooter will have almost surely dug its kickstand into the dirt alongside the dumpster. If it weren’t for the growing knowledge that it resides in a basement whose main door opens into an alley, you wouldn’t know Valley Bar existed. But then the bouncer smiles and assures you this is the place. You stick your face into the darkness and head down the stairs, your mood and your work and your life falling off of you with each step, and arrive at a fork in the road made of doors. Which one you choose doesn’t matter. Either way, the place unfolds into a three-piece wonderland: part music hall (with a bar), part ‘80s arcade, and part secret restaurant serving up Short Leash gourmet dogs and throwing the silhouettes of hanging metal art onto the main bar’s facade.

Now you’re in on the secret. Valley Bar is the distinctly Phoenician third place that never existed and should have all along. Food and beverage manager Grace Perry says it all: “We don’t want to be a Portland bar. We don’t want to be a New York bar. We want to be an Arizona bar. And we want to do everything we can to keep it that way.” Co-owners Charlie Levy and Tucker Woodbury, the duo behind the already legendary Crescent Ballroom, set out to turn this place—this dark expanse of untapped potential—into far more than a music venue. Ending its former life as a storage space on the underside of an otherwise nondescript building, Levy and Tucker have morphed the 8,000 square foot joint into quite the downtown surprise.

And it’s not just the live music that keeps your feet tramping back in night after night. It’s the spoken word shows. It’s the storytelling nights. It’s the dance classes. It’s the literary meet-ups in the faux living room under the stairs. It’s the food.

Whatever draws you in, the place certainly makes a claim on what it means to be an Arizona bar, especially in that we all really want to live underground. The exposed pipes are legit; they’re used by the entire building.

The brick walls seal you in with not a window to be found. The exits are hidden.

It doesn’t matter. It’s not a place you want to leave anyway.

This is no accident. Levy, Woodbury, and team have made the best of a place most would’ve looked right past. “You make your surroundings,” says Perry. “You don’t let your surroundings make you.”

They made their surroundings, alright. Now they’re surrounded by a crowd every time the alley door opens. A few facts before you head over:

• Happy hour is Monday-Friday from 4–6pm and all day Sunday and gives you $1-off drafts, house wine, and craft cocktails.

• If there’s no event, there’s a good chance you’ll run into a free game night with $1-off drafts.

• Games include Skee-ball, darts, board games, shuffleboard, and if you’re lucky, a round of 8-ball.

• Bonus tip: If spaces are few, park at Crescent Ballroom and walk over. It’s closer than you think (like, two blocks), and Crescent has its own lot on the backside of the building.

This is the place. Dig it.