A Bold Aesthetic for a Downtown Law Office 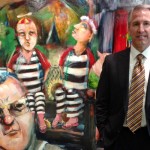 An appointment with a lawyer is not usually an outing on par with a trip to an art gallery. Yet within the legal offices of The Law Offices of David Michael Cantor in downtown Phoenix, prepare to leave behind your preconceptions about stuffy law offices decorated with mundane posters or black and white photographs.

When you exit the elevator and walk through the firm’s glass doors on the 18th floor of CityScape, you are confronted with an 8’ x 12’ foot mural painting of Arizona Sheriff Joe Arpaio entitled When Pigs Can Fly, which Attorney David Cantor commissioned from then local artist Robert Anderson in 1997. The brightly-colored painting, known throughout the office simply as Tent City, depicts the Tent City jail in downtown Phoenix. It has become such an established focal point to the office that its image is emblazoned on the complimentary water bottles given to guests. For Cantor, the bold conversation piece is integral to the spirit of his practice and Cantor is clearly proud to have When Pigs Fly displayed so prominently. The Cheshire Cat peering down from the top of the painting at the ruckus below reminds Cantor of the cat he owned at the time, and he notes that “the nose [on Arpaio] is very distinctive, and Robert [Anderson] told me he did that on purpose.”

While approximately 60 of the more than 100 paintings, drawings and prints in this avid collector’s possession are on display throughout the offices, this is not a corporate art collection. Cantor acquired each piece over the past 25 years personally, and many have transitioned back and forth between his office and home.

Cantor estimates that 90 percent of the collection is comprised of local Arizona artists. With the exception of one or two, all works in the collection were created by living artists.

Cantor buys a piece because he likes it. “It’s personal, it’s not value driven.” Working without an art advisor, and a casual, but not close relationship with many of the gallerists and artists, allows Cantor full control over his collection, which includes a number of provocative political works.

Somewhat counter intuitively, the more outlandish pieces are on display at work, while the less salacious works stay in his private residence. “I’m a criminal defense lawyer,” Cantor says by way of explanation. The paintings are not merely decorative pieces to fill conference room walls, but pieces rife with social commentary. “It’s personal, but we display a lot that’s relevant.”

Asked if any artwork has offended a client, Cantor dismisses this notion.

However, one painting, Colin Chillag’s It is a Fearful Thing to Love What Death Can Touch (of “The Girls Next Door,” an E! reality TV show about the Playboy Mansion), was deemed unsuitable for the average visitor, and now resides back by the IT desk. Other paintings, like Eric Cox’s Sheriff Joezo and The Wicked Witch of the Southwest, both purchased from R. Pela Contemporary Art‘s “The Joe and Jan Show,” or a yarn portrait of Governor Jan Brewer, Brewer? I Don’t Even Know Her…, by Todd Daniel Grossman, are scattered throughout the office.

Brian Boner’s Theft Balloon and Disappearance, both from 2004 and displayed as a diptych, depict a less overt political message. Both were purchased during a First Friday art outing. “Boner’s garage was open and he was working on this piece and I said I’ll take ‘em.”

Another painting by Boner, acquired during Modified/Arts‘ “Twenty-Six” Art Detour group show, is one of his most recent additions.

Cantor’s life as an art collector began in law school in 1987 with a print by Olivia De Berardinis, inscribed to him by the artist, “To David, Good Luck in Law School.” He bought a second piece right after that, by Patrick Nagel, and a collector was born.

While he does not have a formal art education, he relies on magazines like Art in America and ARTnews to keep him informed, as well as visits to local museums when he travels. He frequents downtown galleries like Modified/Arts, Eye Lounge and R. Pela Contemporary Art, whose recent show, “Banned at the Herberger,” Cantor cites as a recent favorite.

His collection is united with color and figuration. “That’s the theme. A lot of these either have faces of a human or an animal, or it’s color. Fauvist. Almost everything has color. Even the so-called muted colors aren’t really that muted.” Brewer? I Don’t Even Know Her… by Todd Daniel Grossman. Yarn and rosewood needles, 2013.

The literal translation of fauve is “wild beast” and refers to the early 20th century art movement of brash, bold colors and apparent brushstrokes. It is the focus on brightly pigmented colors that shows the Fauvist influence in Cantor’s collection. A reinterpretation of “wild,” which includes socially progressive subject matter and outlandish presentation of some of the central figures is central to his collection as well.

The collection, as well as the office space, is constantly growing. Every office has at least one framed work on its wall, all curated by Cantor. Office inhabitants rarely get a say as to the art on their walls. Throughout the hallways, paintings reach towards the ceiling and the rare blank wall is merely a space that has yet to be filled.

Behind the reception desk—and directly facing Tent City—is another rare commissioned piece, this one a copper fountain by Gary Slater. It provides a sense of tranquility with undulating earth tones setting a serene scene. The juxtaposition of this subdued piece with the brashness of the Arpaio mural enables Cantor’s duality, as a lawyer and art collector, to shine through. This collection of bold work by talented local artists’ uniquely embodies his personal aesthetic sensibilities, as well as the rich scope and quality of contemporary art being produced in Phoenix today.