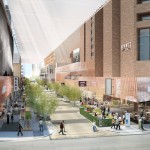 On Wednesday, November 5, the Downtown, Aviation and Redevelopment Subcommittee of the Phoenix City Council was given an update and preliminary recommendations on a new vision for activating Adams Street between Central Avenue and 2nd Street. The purpose of the study, conducted by Gensler, a global architecture design, planning and consulting firm, was to identify ways to enhance both the pedestrian and the economic vitality along this section of Adams Street. Adams Street was chosen as the focus for the study for several reasons, according to Eric Johnson, Economic Development Program Manager at City of Phoenix. “With two major downtown convention hotels nearby [Hyatt and Renaissance] and the opening of the light rail, Adams provides a natural gateway into the city for visitors,” said Johnson. “And so many events are already happening on Adams, it just made sense.” The study relied heavily on community input, which included over 30 meetings with individual property and business owners on the street, as well as four interactive community meetings (pictured above) at the Phoenix Convention Center.  The community meetings engaged more than 100 stakeholders, including downtown residents, workers, business people, nonprofits and community advocates.

While still in a very preliminary stage, the renderings that Gensler Managing Director Beth Harmon-Vaughan and city staff shared with the sub-committee clearly embraced the input they had received from the businesses, property owners and community members.  Harmon-Vaughan said that the overarching directive from the outreach was to “think big.” She emphasized that the renderings are not intended to be designs, just a way to conceptualize the feedback that the space serve a multi-purpose function.

“The community agreed that the street activation should create a memorable destination with a distinct identity that is built on a platform of street improvements,” said Harmon-Vaughan. “The consensus was to keep Adams open to traffic during regular business, but to make it easier to close it off for special events.” Suggested street improvements include reconfiguring parking from the current angled parking to parallel; adding shade elements that include both trees and overhangs; finding ways to incorporate art throughout the area; improving lighting and signage; adding event infrastructure; and streamlining the process for temporary street closures. The sub-committee members provided enthusiastic input, which included reiterating the need to create a distinct identity for the area, along with a recommendation by the subcommittee chair, Councilman Michael Johnson, that the renderings be improved to “clearly show Adams as open to traffic.” He noted that “the current rendering shows cars parked, but it is important to see the street in use.” Read detailed summaries on the staff recommendations.

Councilmen Michael Nowakowski and Daniel Valenzuela noted the amount of public input that went into the study as they voted unanimously to send the study along to the full council for approval.

So what happens next? Eric Johnson, Economic Development Program Manager with the city explained that once the city council approves the study, the next step is to create policy guidelines for the council to follow once funding is available.

He clarified that there are essentially three areas for recommendation: low cost things that the city can do in the near term like activating the tenant space where the Matador restaurant used to be and encouraging increased cultural activities; developing the Adams Lot (the southeast corner of Adams and Central); and working with the two hotels  in a public/private partnership to improve and activate the public right-of-way.

The city will determine what will work best from a tenant management perspective in the old Matador space and will incorporate those needs into an RFP (Request for Proposals), which should be issued in the first half of 2014. A second RFP will be created and issued in early 2014 to develop the Adams Lot with a midrise property that incorporates restaurant/retail space on the ground level with residential or hotel space on the higher levels. Events planned outside Phoenix Convention and two hotels could be a regular occurrence.

The third category for recommendation will be to develop a public/private partnership between the city and the two convention hotels to improve the public right-of-way.  Achieving this part of the vision will necessitate investment from the city on street improvements, such as accessible electricity; sleeves for temporary bollards for street closures; event lighting; rolled curbs; improved signage; and reconfigured parking. The partnership will also involve investment from the hotels to renovate ground floor spaces; create structural shade elements; incorporate more art into their facades; and to activate the sidewalk with seating, restaurant patios and the like.

The Adams Street Activation Study is step one in the process of revitalizing this section of downtown, which provides such a critical first impression to visitors. There is a lot more work to be done to plan and implement the vision expressed by the study participants. The hope is that the ideas that are ultimately implemented will be replicable elsewhere, which will add to the overall vibrancy of the downtown core.

Images provided by City of Phoenix.