What is one of the biggest art galleries in the greater Phoenix metropolitan area?

It could be the one you rode to work on this morning, if you took the light rail. And for the past 15 years, Valley Metro has been cultivating and showcasing the arts in Phoenix, Tempe and Mesa while it promotes public transportation. “It’s this humongous, public art gallery,” explains M.B. Finnerty, public art administrator for Valley Metro of their public art program. There are currently 35 light rail stations, plus the Tempe Town Lake Bridge, and the art placed there is part of “an extensive public outreach program,” she notes.

Valley Metro’s public art budget is substantial, representing up to 1 percent of the light rail’s overall construction costs. Finnerty emphasizes that the artist and art selection process is a major exercise in collaboration and community-building. For the light rail projects, Finnerty says it all starts with a call to artists, or Request for Qualifications, in which artists submit images of their past work. Then stakeholders, such as local business owners or those interested in art, are chosen specifically from the areas around the station to form selection panels to choose the artists.

Later, a regional rail arts committee comprised primarily of professional artists nominated by the cities will weigh in on the art ideas proposed by the artists and help refine them. At several points along the way, public meetings are held to get additional feedback from the community as the idea is developed into a piece of public art. Finally, after construction is complete, there is a big celebration. “It’s a really fun process,” Finnerty adds.

Recently, Valley Metro submitted its call to artists for the South Central light rail extension. They are looking for a total of 14 artists, including five emerging artists and nine more experienced artists. The artists chosen will be asked to meet with the community, hear their stories, and consider research material as part of the process. “It speaks to the location,” Finnerty says. “You’ll see the artwork is so diverse.”

“We have a great variety of types of artists,” she continues. “They didn’t come with preconceived notions of what the art was going to be. We have very site-specific work.”

“(The art) transforms a place and it’s something the community feels they have ownership of,” Finnerty adds. “It’s something you can feel proud of.”

There’s yet another art component to the stations. Valley Metro, with assistance from a group of art administrators in a variety of cities, has a program to do temporary station art works, known as its “ArtsLine Rotating Transit Art Series.”

During April’s First Friday, Lauren Lee’s distinctive piece “Bloom” was installed on the back wall of the Roosevelt/Central light rail stop in the Arts District. The fine artist and Phoenix-based muralist created an original oil painting, which was transformed into a large vinyl print for the wall. 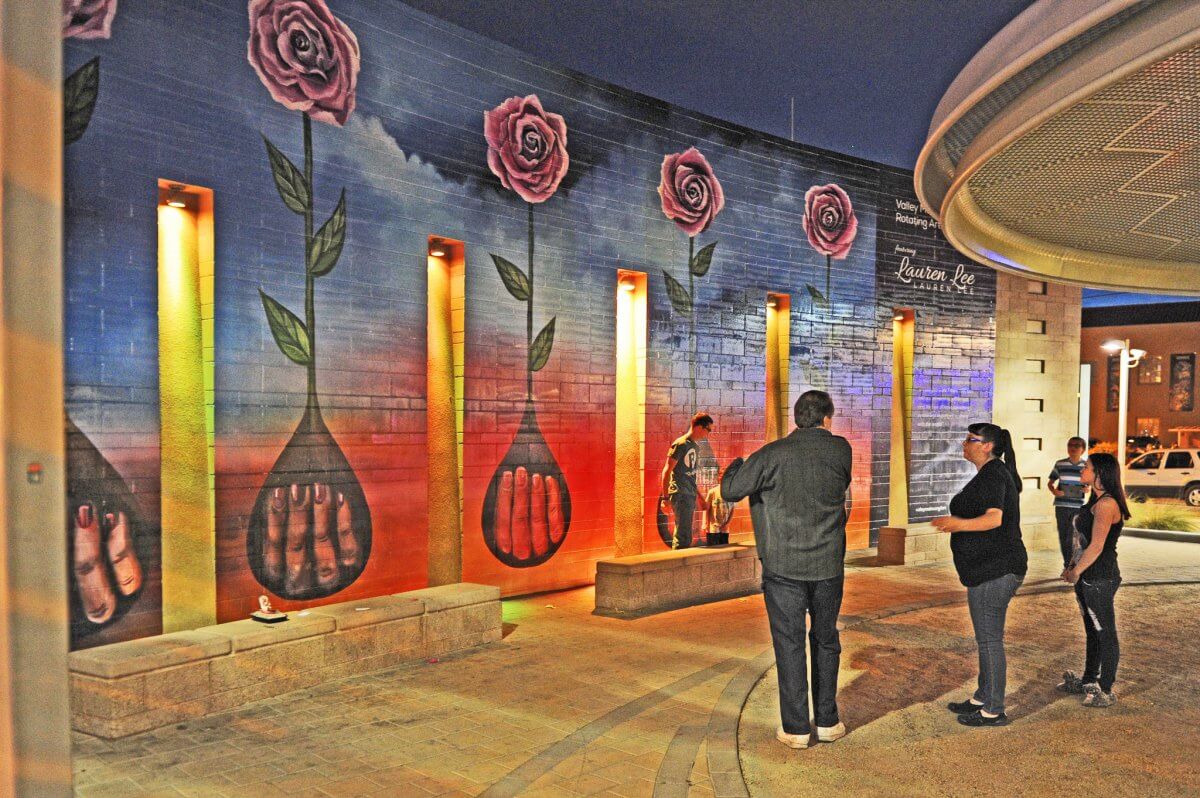 “I knew that I wanted to do something that talked about our potential,” Lee explains. “We do bloom as people … if we move toward our gifts and our talents. It was my intention to show we have so much human potential, and just as flowers bloom, we can too. It’s in our nature to bloom.”

David Gilcrest, 33, of Phoenix, says he has noticed “things not so artsy” in the area of Lee’s mural before it was there, but now there seems to be less trash, more respect for the space and it adds a vitality that wasn’t there before. “It’s creepily beautiful,” he says, standing in front of the mural one afternoon with a friend. “I like it. It definitely brightens the area up a bit.” John Carter, 62, of Phoenix, says in general he likes most if not all of the art he’s seen along the light rail, though he concedes it would be impossible to please everyone. “I like the concept,” he says.

Lee says she is particularly proud that “thousands” of riders see her work now regularly as they ride the light rail, and she hopes it breaks down a sense of urban isolation with the humanity it conveys. She also likes that it gives everyday people who may never set foot in a traditional gallery a chance to experience fine art.

When she was a high school teacher, Lee says, she took the light rail to work daily. “I felt very connected to the community when I was taking light rail,” Lee adds. Now the Yuma native takes it to any kind of cultural event, and appreciates not having to worry about parking hassles. To help the public enjoy the arts, Valley Metro offers an Arts and Culture Destination Guide, along with Valley Metro Art books that contain photos of public art at each Valley Metro rail property and include a summary of the artist’s vision.

Valley Metro Rail connects to more than 55 arts and culture destinations in Phoenix, Tempe and Mesa. “We can get you to all the wonderful cultural resources we have in these cities,” says Ann Glaser, public information specialist for Valley Metro.

Performance art is also featured. Every February, Rising Youth Theater partners with light rail to provide dance, music and theater for riders from the Roosevelt/Central stop to the Camelback/Central stop. The theater group helps cultivate the arts in students who haven’t had a lot of exposure to it and pairs them with mentors to create plays and performances, Glaser says. In addition to the station art projects, Valley Metro has a “Design a Transit Wrap” high school art contest.

Recently, Glendale’s Sofia Garcia, a senior at Cactus High School, won the 2017 contest, her second time. She won in 2015 as a sophomore. Her artwork, titled “The Journey Begins Here,” was selected out of 150 entries by high school students throughout the valley. It will be featured on a bus and light rail train for a year.

Garcia plans to attend Arizona State University in the Fall on an art scholarship with hopes of pursuing a career in graphic design.

Valley Metro also has a 3rd grade art contest in which students were asked to design artwork showcasing “Valley Metro: Hop Aboard and Let’s Explore” for its 2017 Transit Education Calendar. A total of 584 entries were submitted by 3rd graders from 46 valley schools. For more information on the art programs, check out Valley Metro’s website.